A recent study has periodontists, experts in the treatment, diagnosis, and prevention of periodontal disease, encouraging patients to maintain gum health in an effort to reduce their Alzheimer’s disease risk.

The study, published in the journal Science Advances, uncovered a potential link between P. gingivalis, the bacteria associated with periodontal disease (commonly known as gum disease) and Alzheimer’s. Researchers analyzed brain tissue, spinal fluid, and saliva from Alzheimer’s patients—both living and deceased—and found evidence of P. gingivalis. Gingipains, the toxic enzyme secreted by P. gingivalis, were found in 96 percent of the 53 brain tissue samples examined, with higher levels detected in those with the pathology and symptoms of Alzheimer’s disease.

Additionally, researchers including co-author Mark I. Ryder DMD, Professor of Periodontology at the University of California, San Francisco, noted that the presence of P. gingivalis increased the production of amyloid beta, a component of the amyloid plaques whose accumulation contributes to Alzheimer’s. The study confirmed via animal testing that P. gingivalis can travel from the mouth to the brain and that the related gingipains can destroy brain neurons. These findings are noteworthy in that they suggest a biological mechanism for how periodontal disease bacteria may play a role in the development and progression of Alzheimer’s.

According to Richard Kao, DDS, PhD, president of the American Academy of Periodontology (AAP), the professional society representing more than 8,000 periodontists, this study underscores the important role of gum health on overall wellness. “Periodontists have long known that a healthy mouth contributes to a healthy body, and research has suggested an association between periodontal disease and dementia conditions, such as Alzheimer’s,” Dr. Kao said. “These recent findings present strong evidence on how periodontal disease can impact the pathogenesis of Alzheimer’s disease and should highlight how crucial it is to manage periodontal disease, especially in older adults or individuals who have increased risk for dementia.”

Although the study results add to the evidence supporting a link between gum disease and Alzheimer’s, additional research is needed to better understand the etiology of Alzheimer’s and how periodontal disease bacteria can exacerbate progression. An upcoming FDA Phase II clinical trial will assess the benefits of using a novel small molecule inhibitor of these P. gingivalis gingipains in hindering the development and progression of Alzheimer’s. This clinical trial may add further insight to the link between gum disease and Alzheimer’s.

Dr. Kao encourages older adults and other at-risk individuals to maintain diligent oral care and promptly treat periodontal disease to help mitigate Alzheimer’s risk. “More than half of the U.S. population age 30 and older has some form of periodontal disease. Prevalence increases to 68 percent for those age 65 and older. Routine brushing, flossing once a day, and visiting a periodontist can help identify any disease and treat as needed, potentially diminishing the risk of developing Alzheimer’s.”

To learn more about periodontal disease or to find a periodontist, visit perio.org. 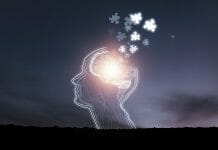 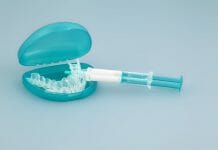 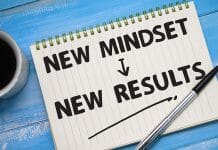 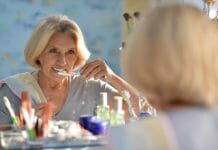