Lovers of red wine the world over are encouraged to raise their collective glasses and cheer the latest positive news concerning the ongoing and expanding positive benefits of drinking the red fruit of the vine. It has already been acknowledged for years that drinking red wine benefits both hearts and colons, due to the concentrated presence of polyphenols.

Now, thanks to the efforts of the research team composed of Adelaida Esteban-Fernández, Irene Zorraquín-Peña, Maria D. Ferrer, Alex Mira, Begoña Bartolomé, Dolores González de Llano, and M. Victoria Moreno-Arribas, their paper, “Inhibition of Oral Pathogens Adhesion to Human Gingival Fibroblasts by Wine Polyphenols Alone and in Combination with an Oral Probiotic” published on February 28, 2018 in the Journal of Agricultural and Food Chemistry, has offered new insights into the effects that polyphenols might yield to the field of dentistry.

The Power of Polyphenols

While more research into the power of polyphenols needs to be performed in the future, existing discoveries have proven to be exciting and revealing. Polyphenols were first discovered to be an antioxidant compound, which scientists have learned are excellent protection against free radicals. Free radicals are responsible for aging and breaking down cells, including accelerating the growth of cancer in cells.

Many wine enthusiasts found reason to celebrate their beloved habit when it was announced that a glass of red wine might help offset potential heart attacks, with some die-hard wine advocates going so far as to pronounce it a cure for cancer!

Without intending to go overboard, new research further cements the medical virtues of polyphenols. By positively and actively interacting with bacteria in the intestinal region, polyphenols are now being identified as an effective bacteria fighter as well. This discovery came about as scientists connected the dots from the fact that plants also employ polyphenols to thwart infection from various bacterial bad guys and followed that logical link to another healthy conclusion.

The Slippery Side of Polyphenols

Curious to see how the polyphenol properties of red wine might aid in preventing bacterial build up in the mouth, the research team for this project decided to follow this path further. They first isolated extracts of both grape seed and red wine, in addition to two red wine polyphenols, and tested them against bacteria that typically forms and sticks to teeth and gingiva, and are responsible for setting the initial stage of cavities, dental plaque, and periodontal disease.

By using cells that mimic gingival tissue, researchers were able to pick out two red wine elements, caffeic, and p-coumaric acids, that proved to perform better than the extracts in reducing the ability of the bacteria to adhere to the cells. Combining those two elements with an oral probiotic, Streptococcus dentisani, the polyphenols performed even better in keeping the bacteria from gaining entry into the cells.

In essence, the polyphenols have a slippery property that frustrates the bacteria’s ability to gain a solid hold, the first stage in developing cavities, dental plaque, or periodontal disease. It is anticipated that further research will pinpoint the best methodology for using this preventive process.

Meanwhile, it certainly does not hurt to pour yourself another glass of Merlot, Cabernet Sauvignon, or other favored red wine as a gesture to good health and happy living. May we all live long enough to find even more ways that red wine proves to be good for mind, body, and soul!

Meanwhile, as you stock up on your favorite red wine selections, do not forget to Skip the Sip, another article on Today’s RDH which explains the reason why you should avoid the habit of letting wines or other flavored libations sit for too long in your mouth. 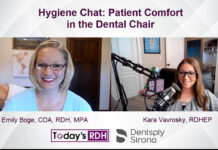 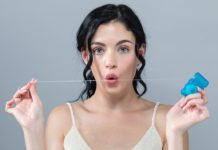 Flossing: An Inexpensive Way to Add Years to Your Life 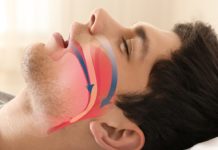