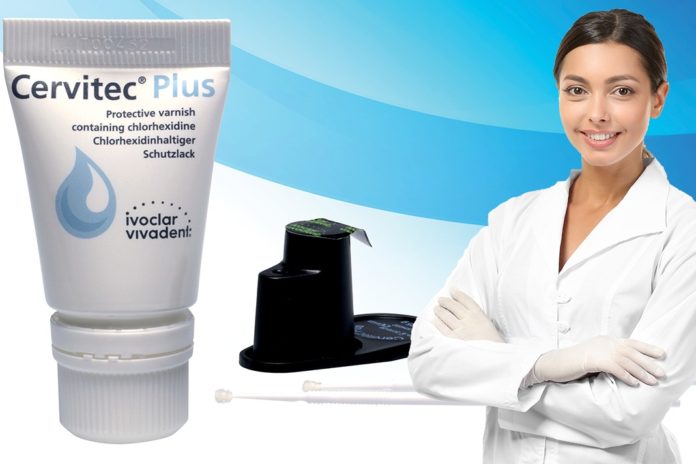 Disclosure: This article is sponsored by Ivoclar Vivadent as part of our sponsored partner program.

What is Cervitec Plus Chlorhexidine Varnish?

Cervitec Plus is a Chlorhexidine protective varnish. In 1993, the initial Cervitec product was made available to the public for the purpose of:

Cervitec Plus was released a number of years later, providing improved adhesion over the original product, which enhances its ability to provide desensitization of teeth. The varnish component is dissolved into a neutral mixture of ethanol and water, making it hold up better to moisture during the application.1

Cervitec Plus contains 1% chlorhexidine diacetate and 1% thymol as the active ingredients. Once Cervitec Plus varnish is applied and has dried, it contains approximately 10% of chlorhexidine and 10% of thymol. Thymol, like chlorhexidine, has an antimicrobial effect as it is an essential oil of thyme. Thymol is also effective against fungus (fungistatic), like yeasts. It is efficacious based on its ability to denature proteins and destruct cell membranes.1

Cervitec Plus is applied supragingivally affecting biofilm. Unlike chlorhexidine rinses, it does not come in contact with fibroblast cells and therefore does not inhibit healing and reattachment. Cervitec Plus also does not stain, cause taste impairment, or increase calculus build-up, as chlorhexidine gluconate rinses often do.

Cervitec Plus vs. Chlorhexidine Oral Rinses

Chlorhexidine oral rinse has long been the go-to for many dental professionals. However, many patients balk at these rinses due to the unpleasant taste, taste alterations, and the staining of teeth, tongue, and restorations. By eliminating the unpleasant taste and reducing the staining experienced with oral rinses, Cervitec Plus provides an excellent alternative that can be used for patients of all ages. Some of the other benefits of using Cervitec Plus instead of a chlorhexidine oral rinse include:

Cervitec Plus chlorhexidine varnish is indicated for the protection of exposed root surfaces and the treatment of hypersensitive cervicals. A third off-label use, similar to how fluoride varnish is used off-label to prevent caries, is the reduction of bacterial activity on tooth surfaces. This makes it ideal for use as an adjunct to non-surgical periodontal therapy (SRP) and periodontal maintenance, around orthodontic bands, erupting teeth, around prosthetic restorations, implant maintenance, and as the last step of restorative procedures to ensure the quality of the restoration.

Currently, there are two approaches to treating dentinal hypersensitivity based on the hydrodynamic theory. One approach is sealing dentinal tubules to prevent movement of fluid, and the other is inhibiting the neuronal transmission of the stimuli. The mechanism of action for Cervitec Plus is sealing open dentinal tubules1 and reducing the permeability of dentin2.

In clinical studies comparing the use of Cervitec Plus and the original Cervitec, it was found that both products offered relief from tooth hypersensitivity and that the effects on hypersensitivity were already noticeable one day after application. A significant improvement in hypersensitivity was experienced by the users of both products within one week. However, the effectiveness of the original product began to decrease within three months, while users of Cervitec Plus noticed no difference in the quality of protection after this amount of time had passed.1,2

The prevalence of root caries increases with age, due to gingival recession because of periodontal disease, traumatic occlusion, as well as use of medications that reduce the amount and quality of salivary flow. Multiple tests have indicated that Cervitec is effective in reducing the number of lesions and root caries in senior adults, including those with extended crowns and other dental work.1,11-13

Off-Label Uses for Cervitec Plus

The U.S. Food and Drug Administration has approved the labeled use of Cervitec Plus for protection of exposed roots and the treatment of tooth hypersensitivity. However, there are other scientifically-proven, off-label uses for the product. In particular, it is used by dental professionals to reduce bacterial activity on the teeth, implants, and around restorations. Reducing bacterial activity results in the elimination of biofilm buildup and lowering the risk of decay. Some of the specific bacteria that the product is found to inhibit includes1:

Numerous studies have revealed the benefits of Cervitec Plus for reducing bacterial activity. Some of those results include:

Caries and S. mutans reduction in children and infants

Transfer of S. mutans from mother to children

From reducing white spot lesions in orthodontic patients to increasing healing in periodontitis patients, chlorhexidine-containing Cervitec Plus varnish has several benefits. These benefits can prevent disease and treat patients from our youngest pediatric patients to our patients in their golden years without the side effects of chlorhexidine rinse.

To learn more about Cervitec Plus, visit https://www.ivoclarvivadent.com/en/p/all/products/prevention-care/bacteria-control/cervitec-plus 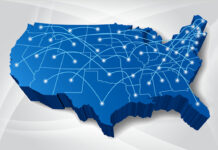 The Relationship Between Poor Dental Hygiene and Cancer

DENTISTS: Why You Should Give Your Hygienist 60 Minute Appointments 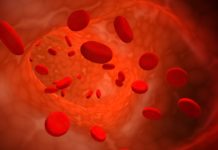